You are here: Home / Archives for Canadian History / In the News

Two History Moments produced by History Lives Here Inc. on the canning industry of Prince Edward County are featured at a new exhibit, which opened May 13th at the Canadian Agriculture and Food Museum in Ottawa.

Food Preservation: The Science You Can Eat is an exhibit which tells visitors the story of food preservation from the first days of settlement when aboriginal peoples and settlers dried, salted and buried food to survive long winters to technological advances such as the canning of foodstuffs in the 1880s and development of frozen foods in the 1930s. Today, scientific innovation in the food industry allows us to grow and import food from all over the world that retains its nutritional value over an extended shelf life. Finding ways to preserve food is one of the greatest advances in civilization.

Canadians can take credit for many of these scientific breakthroughs. Research at the Central Experimental Farm in Ottawa where the museum is located has resulted in a staggering number of discoveries of new plant varieties, processing techniques, and food products. While the preservation of food through the canning process dates back to the Napoleonic era, the fruit and vegetable canning industry in Canada took root in the small community of Prince Edward County in the 1880s. In 1882, Wellington Boulter, the father of the canning industry in Canada, started a small factory in Picton, Ontario. Soon other factories dotted the landscape of this small community, and the area became so dominant in the industry shipping canned goods all over the world that the region became known as the Garden County of Canada. Our History Moment on the origins of the canning industry in Prince Edward County is one of two video features showcased in the museum exhibit.

Our second History Moment featured in the exhibit tells the story of early attempts to advertise canned goods. The first products of the canning industry would be considered unacceptable by today’s standards. Lids were soldered shut by hand and bits of solder often dropped into the canned food. The first tins reacted with the food and caused lead poisoning. Sanitary practices throughout these rudimentary factories were largely absent as the science of canned foods had yet to be discovered. To counter consumer resistance, the early canners spent a great deal of effort on the labels that adorned their products. Embossed colour labels created by design firms in Toronto, Hamilton and Montreal enticed consumers to try these canned products. Today, these spectacularly beautiful labels are artwork that reflects early advertising approaches. Some of the labels that adorned canned goods produced in Prince Edward County were quite likely designed by Group of Seven artists who supported their weekend painting expeditions by day jobs at lithographic firms supplying canning companies with labels.

“We encourage Canadians to take in this wonderful exhibit, “says Peter Lockyer, the producer of the History Moments series. “And we’ve very honoured to have our history features as part of the display. It’s an indication that our work showcasing old forgotten stories from communities throughout Eastern Ontario has a timeless value to museums like the Canadian Agriculture and Food Museum and the thousands of visitors they receive each year.”

To learn more about the Food Preservation: Science You Can Eat exhibit at the Canadian Agriculture and Food Museum, visit their website at http://www.cafmuseum.techno-science.ca 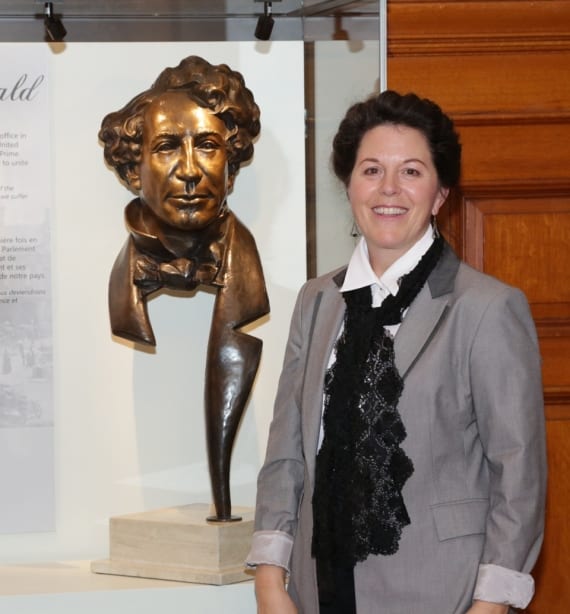 MACDONALD PROJECT IN THE SPOTLIGHT AT THE ONTARIO LEGISLATURE

Members of the Macdonald Project Committee were introduced by Speaker David Levac at the Ontario Legislature on Wednesday, April 2, 2014 and received a standing ovation from MLAs for their project to celebrate the 200th birthday of Sir John A. Macdonald.

The project will create a life-size statute of Canada’s first prime minister as a young man practicing law in Picton in the 1830s. The project has been prominently displayed in an exhibit in the lobby of the Ontario Legislature over the past few months featuring a head study of Macdonald created by artist Ruth Abernethy.

Committee members observed Question Period before being taken on an extensive tour of the Legislature followed by lunch with Speaker Levac in his private quarters. A former teacher and principal, Speaker Levac is the Liberal member from the Brantford area. He is an avid history fan who entertained committee members with stories from his riding of famous Canadians including the Massey and Cockshutt families who once ran major farm implement factories in the area.

The Macdonald Project Committee is now planning its next major event – a re-enactment of the infamous Lazier Murder Trial in 1884 to be held in the old courthouse in Picton on Friday, July 11th 2014 at 1:30.

Judge Robert Sharpe of the Ontario Court of Appeals, a Picton native and author of a book on the case, will be taking guests through key moments of the trial with the help of some of his legal colleagues. The trial resulted in a death sentence for two Prince Edward County men convicted of murder as part of a botched robbery attempt in Bloomfield during Christmas 1883. The two men were hanged a month later – the only two men ever to be hanged in Prince Edward County. A tour of the cells and gallows will follow the re-enactment as well as a reception at the nearby Macaulay Museum. The re-enactment is a fundraising event for the project. 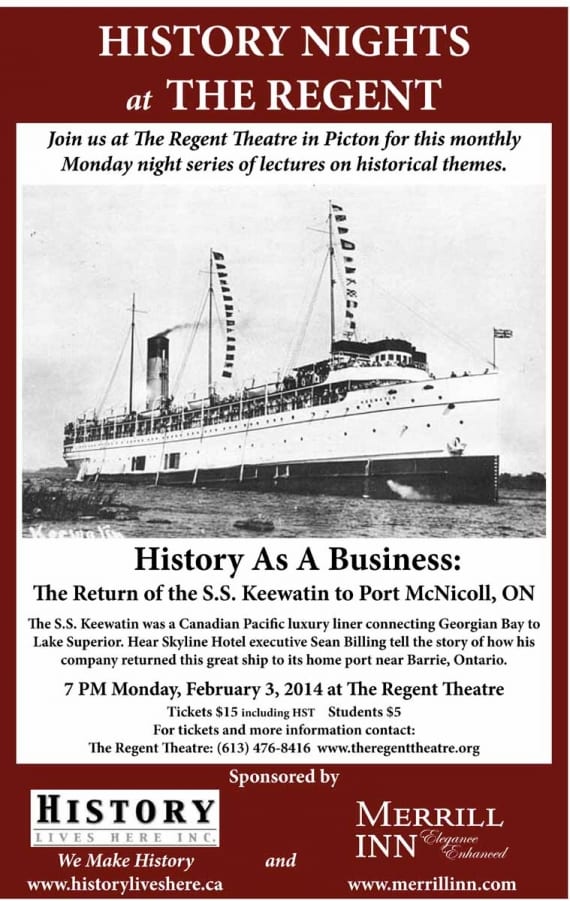 HISTORY AS A BUSINESS: The Story of the S.S. Keewatin’s Journey Home

Hear the story of the return and restoration of the Canadian Pacific luxury liner, The S. S. Keewatin, to its home port of Port McNicoll, Ontario as part of the History Nights At The Regent lecture series on Monday, February 3rd, 2014 at 7 pm. at The Regent Theatre in Picton.

The S.S. Keewatin was built in Scotland and launched in July 1907. Destined to be a passenger and freight carrier linking the rail terminus in the community of Port McNicoll near Barrie, Ontario with the railhead at what is now Thunder Bay, this great vessel spent nearly 60 years in service until its retirement in 1967 as one of the last of its kind. Bound for the scrap yard, the Keewatin was rescued by an American entrepreneur who brought it to Douglas, Michigan where it became a floating museum for the next 45 years.

But in 2012, this iconic piece of Canadian history was returned home by Skyline International Developments as the centerpiece of their $1.6 billion re-development of the waterfront and railway terminus in Port McNicoll. This is a great story about maritime history. But it’s also an intriguing story about the business of history.

Skyline executive, Sean Billing, will be discussing his company’s two million dollar investment in the Keewatin and their plans for the vessel as part of their development project. John Fulford-Brown of Kee Media Group, the producers of the documentary Bring Her On Home – The Return of the S.S. Keewatin, will also screen the one – hour film.

History Lives Here Inc. sponsors the History Nights At The Regent lecture series in association with The Merrill Inn and The Regent Theatre.